In 2000, we identified Communitarianism as the legal system supporting Agenda 21. We identified the "guru" of the Communitarian Network, whose own writings tell us he was a terrorist, a soldier and now a planner in the Zionist takeover of British Palestine.  I quickly understood why some Christians would never consider these facts, but I've been trying to understand why so many of the Americans actively opposing Agenda 21 and claiming to be on our "side" avoided discussing Communitarianism and its root philosophy, Zionism, for 13 years.

I couldn't understand why the Liberty movement took no interest in the Communitarian philosophy either, especially after Washington Post Columnist E.J. said the last battle would be fought between the Libertarians and the Communitarians. When the leaders of the Libertarian Party REFUSED to acknowledge that challenge, told me the word was "too hard" for Americans, I was confused by that. I waited for Ron Paul to say the word just ONCE during his Liberty campaign, and his silence did nothing to alleviate my suspicions that all was not as it seems in the Liberty corner.

It's recently been revealed that Ron Paul's Homeschooling program is connected direcly to  Christian Futurist Dispensationism. This explains to ME why RP, Tom Woods and all the other Von Mises "liberty" economic proponents refused to discuss or debate Communitarianism.

Now it's been revealed that Rosa Koire, who is the only person out their speaking against Agenda 21 who alludes to the term "communitarian" in her speeches (but never fully explains it), is censoring the most relevant FACT about it. On page 31 of her book, Behind the Green Mask, she does a very tricky thing. In the top half of the page she writes, "calling it a Zionist plot is absurd" and the bottom half of the page encourages her readers to "Familiarize yourself with communitarianism."  Rosa learned ALL the facts about Communitarianism when she read both our "excellent books" (her words) about it in 2009, but when she included our research in her book in 2011, she used it on the same page where she negated our research as "absurd." Sure, she cites us in the back somewhere (not on the page where she distorts our original thesis), and she has links to us from her websites, but so what...so does Etzioni and the Communitarian Network.

The war against the slippery Etzioni and his Zioni followers takes many shapes and forms. 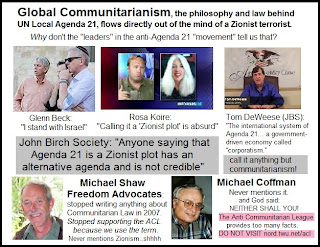 Ron Paul, and his supporters are unambigously against Agenda 21 and fighting every battle we identify. Ron said nothing about it? Bush identified 5 agencies to implement. those were the 5 agencies Ron Paul's budget got rid of entirely.

On his homeschool, Ron has a bunch of people helping with curriculum. Woods is Catholic, North is not. But Ron has said the curriculum will be friendly to religion, but not religious in itself.

Can you provide a source link to where Ron Paul has talked openly about Agenda 21 or Communitarianism?

The Catholic church is promoting Communitarianism, as are many Protestants, Mormons and Muslims.

To claim to oppose Agenda 21 all the while supporting Communitarianism is dishonest.

Half-truths = No truth at all

Funny how that works. Seems those libertarians... just can't seem to deviate... from their [shopworn] talking points. As it throws them off their game... every time!

I've seen only one ad hoc video, taken by a fan, on Youtube where RP says he is fighting the UN and its collectivist agenda. And that's it. I share your thoughts on this, Niki.

I believe RP and Rand both know that at best, they might impact the Communitarian movement. They will not stop it or change its main goals. To suggest they are 100% against it would be political suicide for them. They would then have no impact at all.

Some good reading for you...
http://www.american-buddha.com/lit.terrorismilluminati.toc.htm

This explains to ME why RP, Tom Woods and all the other Von Mises "liberty" economic proponents refused to discuss or debate Communitarianism.

The only people willing to use the term are those openly pushing it.
This is why I don't trust the self titled "opposition".
It sounds so much like "communism", that repeatedly mentioning it with a brief description would trigger interest in any constitutionalist.
It would be a win-win, but it's never mentioned.
I smell something rising from deep down below, and it ain't roses.

Tom says, "Of what use is this ridiculous label?"
Exactly! It is another nice fuzzy Orwellian word that means statism, authoritarianism, totalitarianism, or fascism. Do we really need another one? Americans can't define the non-Orwellian words with the same meaning.
https://en.wikipedia.org/wiki/File:Multi-axis_political_spectrum.svg
From chart:
Top left – Statism The opposite of libertarianism, corresponding with those supporting low economic and personal freedom. David Nolan originally termed this philosophy populism, but many later renditions of the chart have used the label statism, authoritarianism, totalitarianism, or fascism instead. Many libertarian groups have labeled that section as communitarianism.

Ummm.
Is this Blog censored? lol. How come my comments won't go through?

I have been in rural Alaska all summer since I posted this article. I borrow a computer and post your comments when I can. :)

RP never says it Lark, and the rat is stinking to high Heaven Chris!

"Tom says, "Of what use is this ridiculous label?" Exactly! It is another nice fuzzy Orwellian word that means statism, authoritarianism, totalitarianism, or fascism. Do we really need another one?"

Whether we "need" it or not is not the issue here. To continue to pretend it doesn't exist in EXACT TERMS is the ONLY issue I have with the Libs/Republicans, Democrats, Greens, Constitutionalists, et. al.

Communitarianism is more than a nice fuzzy Orwellian word. That's the standard Libertarian cop-out excuse! I hear it over and over. I've seen the Nolan Chart more than once, and in my opinion it was specifically designed to keep Communitarianism "fuzzy" enough so people would think it was unimportant. The Libertarians have done a fantastic job of hiding the facts about communitarianism from their members.

The facts are: Communitarianism is the entire system of LAW in the EU, the basis for UN Mother Earth Rights, the basis for all global Agenda 21 regulations and legislative changes, and it includes CORPORATE CAPITALISM, Marxism, Global Free Trade (a Libertarian/Imperialist ideal), CHRISTIANITY, Jewish and Christian Zionism, Islam, and many other major, minor, obscure, secret and ancient religions/philosophies.

I think we are all on the same side. I prefer to use totalitarian because using communitarian is just letting the control freaks control the language. 'Balancing individual's rights with those of the community' sounds so nice and fuzzy. Most Americans have absolutely no clue why that statement means exactly the same thing as 'totalitarianism'. It is hard enough explaining what natural rights are.

As a libertarian, and speaking for most libertarians, we do believe in free trade, without government interference. We get there by following our non-aggression principle. By non-aggression principle, I mean we believe we, and others, have natural (the fact that we were born into this World, alone and free, and we are the most likely owner of ourselves) rights. We have the right to life, liberty, and property. No man, nor government grants us these rights. We are all born with them. So, by that knowledge, we do not have the right to deprive others of life, liberty, or property. Every side of every issue we take follows this simple principle.

So, government, which by definition, has been granted the right to violate anyone's life, liberty, and property, can not interfere in the free exchange of property by two individuals without violating the NAP. None of us are for NAFTA, GATT, or any of the so-called free-trade agreements in existence. Those are treatise created by the Empire, for the Empire, and of the Empire. We do belief that if we want to exchange goods or services with a China-man, than anyone interfering is violating our rights.

As a disclaimer I would like to point out that a true free market cannot exist at the same time as a government. And the US has really never had a true free market. Great Britain and its chartered corporations controlled it until the 'independence'. Then, the federal and state governments fiddled with it until Teddy Roosevelt. At that time, all hell broke loose. Every president since has been a representative of one of two super wealthy factions. Contrary to popular belief, a true free market is the only fair market. There is no way to become mega-wealthy without the ultimate tool - government.

For the best US History class ever, have a listen to Rothbard's The American Economy and the End of LaissezFaire 1870 to World War II. The first class is on the bottom of the page.
https://mises.org/media/categories/217/The-American-Economy-and-the-End-of-LaissezFaire-1870-to-World-War-II
Thanks for the discourse.

They avoid the truth because it doesn't pay and openly talking about the money changers, who are behind it all, will create massive problems for the truth teller. Or they belong to the tribe and that trumps everything else. It isn't communitarianism they are afraid to discuss; it's the who behind it they are petrified of, especially if one is a goy.

In California, I joined up with a group called Citizens Alliance for Property Rights or SFCAPR for short in order to try to stop an Agenda 21 plan known as "One Bay Area."

The group I jointed was created and is led by a woman named Mimi Steel. There is never any mention -- ever -- of Zionism or Communitarianism in her newsletters or her talks or her videos. Mimi Steel was taught by Michael Shaw of Freedom Advocates to fight Agenda 21.

She recommends members to read books about the nefarious plots being perpetrated in the U.S. by implementers of the Agenda 21 Plan, but the books recommended are often written by Zionists.

I appreciate your article here, Niki, since it exposes again some of the people who only give lip-service to liberty and inalienable rights.

Think of all the money this hucksters for anti-agenda 21 are hauling in .. and all the lemmings who follow them in their 'important fight' .. what a con .. what a laugh .. thanks Niki .. great post! I always love the memes you make up and try to include them in video slide shows ... will add this one too .. Sally (0: Hope you are doing well Alaska Lady and family xx